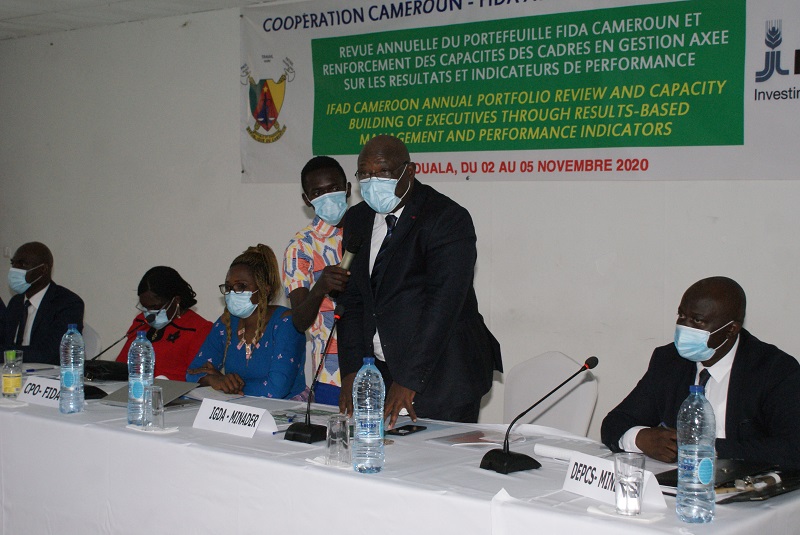 The government of Cameroon and the International Fund for Development and Agriculture (IFAD) Cameroon held an annual workshop on the Portfolio Review and Capacity Building for Executives through Result-Based Management and Performance Indicators. This workshop took place in the country’s Economic capital, Douala from November 2nd, to 5th, 2020.

The three-day workshop was to review the IFAD Cameroon Factsheet containing their activities so far within the country including projects that are yet to be executed.

IFAD is a support program for the rural poor in Cameroon that seeks to enhance the wellbeing of rural poor people. Activities are targeted at improving the incomes and the food and nutritional security of the rural poor, especially women and young people.

Cameroon’s cooperation with IFAD dates as far back as 1981 when they opened a Country office in Cameroon that became a sub-regional hub to facilitate the development and implementation of projects.

Meanwhile, IFAD portfolio in Cameroon comprises of seven projects: two in progress, two recently closed and three in the process of being implemented. These projects targeted over 50,400 people in the Centre, South, Littoral and North-West Regions of Cameroon.

Their six-year program, Youth Agro pastoral Entrepreneurship Promotion Program (PEA-Jeunes) which was launched in 2015 to end in September 2021 has the objective to give rural young men and women the means needed to boost incomes and enhance food security by running enterprises that are profitable, well-integrated in agropastoral value chains and able to create good jobs in these rural areas.

The program is centered on enhancing the creation and efficient management of agro-pastoral enterprises by facilitating their access to appropriate financial and non-financial services.

Targeting youth, it aims at supporting the establishment of a favorable policy, organizational, institutional and legislative environment for the creation and development of agro-pastoral enterprises owned and run by young people.

These enterprises are operating in the areas of inputs fabrication or commercialization, production, processing, marketing and provision of services in commodities like cassava, maize, plantain, pineapple, vegetables, poultry, and small ruminants.

One of the projects, Commodity Value Chain Support Project II (PADFA II) targets 216,642 people. According to the factsheet, it was approved by IFAD’s Board of Directors on December 13th, 2019 and entered into force on September 25, 2020. However, it was officially launched in November 2020 and has been financed by the Project Pre-financing Facility (FIPS).

According to IFAD, PADFA II targets poor small farmers organized into one hundred and eleven cooperatives, and micro-enterprises operating upstream and downstream of the onion and rice sectors (seed producers, processors, traders, suppliers of agricultural inputs and services).

This project was submitted by the Ministry of Environment, Protection of Nature and Sustainable Development (MINEPDED), with technical assistance from IFAD and aims to increase local communities’ resilience to climate change through resilient livelihoods and integrated natural resources management in the outskirts of the Waza, Benoué and Kimbi-Fungom national parks particularly youth and women.

The program seeks to enhance the incomes and livelihoods of smallholder farmers, women and youth by upscaling and increasing their participation in Climate-smart bamboo value chains.

However, IFAD’s flagship program remains the Program for the Promotion of Youth Agro-pastoral Entrepreneurship (PEA-Jeunes), with a total fund of CFAF35 billion FCFA.

In Cameroon, “PEA-Jeunes has introduced the concept and approach of incubation or agro start-ups, which proves to be an innovation in providing financial and non-financial services adequate for the creation and management of Agro-pastoral enterprises by young people,” IFAD Factsheet reveals.